Katana long of Kenpachi Zaraki, a character from the Anime Bleach. The blade is made of carbon steel. The katana measures 148 cm Kenpachi Zaraki is the Captain of the Eleventh Division of the Gotei 13.

The lieutenant of Kenpachi was Yachiru Kusajishi, currently Ikkaku Madarame holds this position. Among the different captains of the Gotei 13 is unique in the rank of captain by defeating and killing the previous captain. During almost the entire series was the only captain who did not know the name of his Zanpakutō and has used his shape sealed during almost the entire series.

£33.98
Katana of the famous series Bleach, which belongs to the character Kisuke Urahara. Kisuke Urahara is the Former Captain of the 12th Division. He is also the founder of the Department of Research and Development. He...
View more
Favorite

The sword of Ichigo Kurosaki, the Anime Bleach 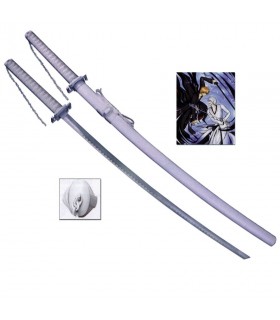 Katana Zanpakuto Hollow Ichigo belongs to the anime series Bleach. The katana blade is made of stainless steel. and the length of the katana is 113 cms. It includes sheath white lacquered.
Add to cart
Favorite

Katana white from the Anime series Bleach. Bleach is a manga series and anime written and illustrated by Tite Kubo. The series follows the adventures of Kurosaki Ichigo, a teenager who accidentally absorbs the powers...
Add to cart
Favorite 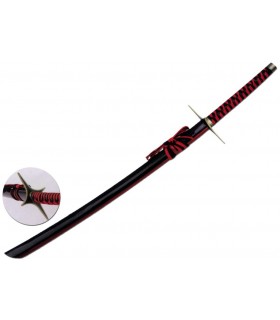