Richard the Lionheart sword, though being not very long (101 cms), has outstanding finishes, engravings and details such as leather plaits around its hilt. The traditional image of Richard the Lionheart, the second Plantagenet king of England, has been preserved through the centuries in a romantic version, as a glorious crusader knight errant, captured by the Emperor of Austria on his return from the Holy Land, rescued by the young troubadour Blondel who discovered them when singing a popular ballad. 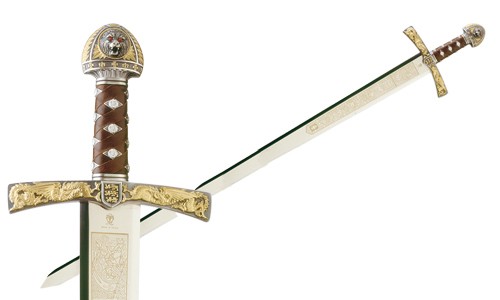 Richard was appointed as Lionheart at the beginning of the Third Crusade, when being compared to Philip of France as a lamb and King Richard as a lion. He convinced his army of belonging to the legend of King Arthur, and of possessing the magic sword Excalibur in Winchester around The Round Table.

Richard was a generous Knight and a shrewd politician but, above all, a great soldier. His own skill at the battle field was an inspiration for his men. 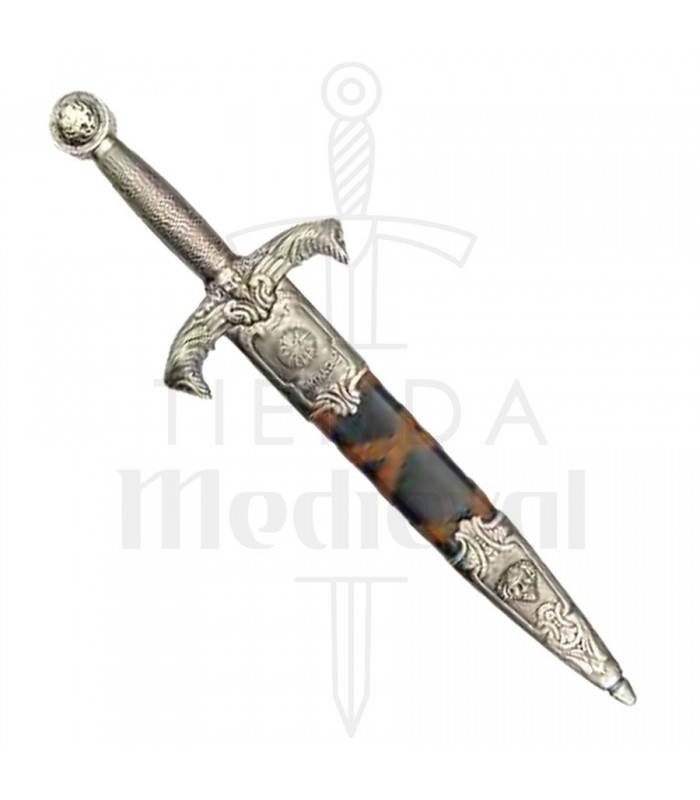 Dagger of King Arthur with sheath. The dagger measures 43 cm and has a sheet of metal. King Arthur also known as Arthur of Britain, is a prominent figure in european literature, especially English and French, in which he is represented as the monarch great in war as in peace.

They are part of fantastic swords, of these weapons designed only for the movies and converted in legends and official products well known by the collectors and geeks. We’re talking about the movie swords, such as Conan, where Arnold Schwarzeneger was the protagonist, Peter Pan, Xena the warrior princess, Hercules, Zorro, Braveheart with Mel Gibson, Excalibur of King Arthur, Batman, Gladiator, Highlander, Alexander the Great, The Cid Campeador, Star Wars or the Lord of the Rings…

The engeneers study how to convert the swords in original and intrepid weapons. In some occasions fantastic ideas are getting the attenction of the spectator. Some of these weapons are made in Toledo (Spain). We all know that Toledo is the cradle of the good steel and the amazing quality swords. Helmet of King Arthur with a crown of brass, and protection for the neck of chainmail also in brass. With an authentic design, this replica is perfect for collections and historical re-enactments.

<--- SHOP NOW --->
Some old legends refer to the Holy Grail as the one being used by Jesus Christ in the Last Supper. The relationship between the Grail, the Chalice and Joseph of Arimathea comes from the work of Robert de Boron, known as “Joseph d’Arimathie”, published in the twelfth century. According to this story, Jesus, already risen from the dead, appeared to Joseph so as to give him the Grail and order him to take it to Britain. Following in this tradition, subsequent writters tell that Joseph himself used the Chalice to collect the blood and water coming from the open wound caused by the spear of a centurion on Christ's side and that, later on, in Britain, he set up a dinasty of guardians to keep it safe and hidden. The hunt of the Holy Grail is an important element in the stories about King Arthur, where Christian tradition and old Celtic myths are combined when referred to a Divine Crock. The first writer to mention the Grail is, between 1181-1191, poet Chrétien de Troyes in his narration Perceval —also called Le Conte du Graal—. The play, presented as taken from an old book, tells about Perceval's visit—who tries to become a Knight to King Arthur -- to the Fisher King's castle, where he is shown the Grail. From that moment, the texts focus on two different stories. On the one hand, we have the stories about the search of the Holy Grail, carried out by King Arthur's knights; on the other hand, we find the Holy Grail's story since the times of Joseph of Arimathea.

According to la Vulgata, the Chalice would have belonged to Joseph of Arimathea's table set, a rich Jewish merchant, who according to tradition organized the Last Supper. Joseph of Arimathea would have asked Pontius Pilate Jesus' body (whom he made bury in his own grave) and the spear he was hurt with (in his power together with the Cup). As Joseph was a wealthy merchant, on a business trip he would have arrived up to Albion (the old name for Great Britain) setting up his home, building a chapel in Glastonbury. When Joseph died, the poems were taken to keep the relics, appointing a Knight for this purpose. Being Sir Pelles the Grail's guardian, another Knight, Sir Balin the Savage, wanted to steal it together with other relics; both fought, but when he lost his sword, Sir Balin took his sacred spear and hurt Pelles; immediately the castle collapsed due to the desecrating. The Holy Grail, then, disappeared until a sincere knight found them. Eventually, Sir Galahad, the holiest Knight of the Round Table, came across the Chalice. On dying, according to the different stories, the Grail was taken together with the knight to the Celestial Realm. In the old Capitular Room, today called Chapel of the Holy Chalice in the Cathedral of Valencia, a chalice is kept as admits Aragonese tradition being the Holy Grail. It has a Chalcedon cup,  which is 7 cm high and with a diametre of 9,5 cm and a foot with handles added afterwards. The archaeologist Antonio Beltrán has dated the higher cup around the turn of the era (first century), carved in an eastern workshop in Egypt, Syria or Paslestine, so it could have been on the Lord's Supper table. John Paul II and Benedict XVI have visited Valencia and they have used this Chalice in the mass Eucharists during their visits. The Church has not proclaimed the authenticity of this relic.